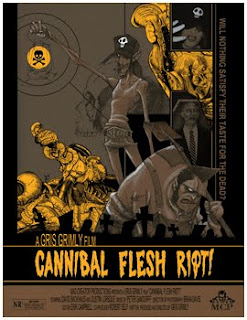 Cannibal Flesh Riot (2006)
Reviewed by :Pigamortis Wrex
Director: Gris Grimly
Time: 29-35 minutes (depending on which cut you get)
This is one of thee most original and entertaining movies your ole pal Pigamortis has seen in quite a long time. The directorial debut of a talented fella, Gris Grimly and Mad Creator Productions. Made on a humble budget of approximately $6,000 it reaches and delivers far beyond what its budget would normally allow.
This film has more to offer in its 30 minutes than most "Big Budget/Studio" films have delivered in recent years.

Its a loving tale of two backwoods, good ole boys, Stash and Hub out in search of a meal... Did i mention that they are ghouls? Thats right, eaters of the dead. They travel into the local graveyard in hopes of digging up some freshly buried eats. I won't give any spoilers here but needless to say, hilarity ensues. Along with some well written Kevin Smithian dialog about condiments, the movie delivers on every level.

What most got my attention was the stylized, slick look of the whole movie. Shot in black and white and even the use of some outstanding animation, this was a mix of the fantasy/horror elements of Tim Burton meets Cabinet of Dr. Caligary meets Lovecraft. Along with a kick ass soundtrack featuring an original score composed by Peter Sandorff (Mad Sin/Nekromantix) and Jeppe Jessen of Hola Ghost. PLUS the discs are LOADED with extras! Commentaries (not 1 but 2!), bloopers, music, featurettes, this one has got it all, piglets! Did I mention Blitzkid doing the title track "CANNIBAL FLESH RIOT"? 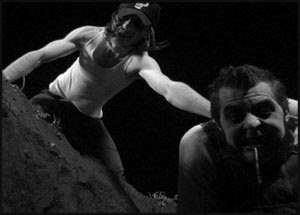 Now this pig hardly ever does this but I say you all need to get your asses over to www.madcreator.com pick up a copy of this film. Whether you're a fan of horror, or an aspiring filmmaker. This is a MUST! It shows you just what you can do with some originality, talent and some drive in a genre which needs all 3. Head on over and give Gris a shout, check out his art and other projects they are workin on. Give them your love and support... and your money! We need to support those who genuinely deserve it and basing my opinion on this project, Gris and the folks at Mad Creator Productions indeed deserve it!
Posted by Rob Dimension at 10:41 AM