Can You Dig It, Blood? The Classic Blackula is reviewed

Can you dig it, blood? 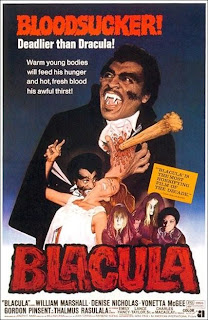 Hey piglets, you all know that yer old pal Pigamortis isn't much on vampire flicks but I come to you with a tasty offering from the wayback 70s!
After a diplomatic meeting between African Prince Mamuwalde (William Marshall, who later went on to become the King of Cartoon) and a very Vincent Price-esque, Count Dracula(Charles Macaulay) go south, Dracula curses Mamuwalde with the infectious bite of undeath and sentences him to an eternity of the thirst for blood. Also thankfully Dracula has a quick wit and dubs Mamuwalde, BLACULA!
So the prince forced to lie dormant in a coffin for centuries until two interior decorators of questionable sexual preference, buy all of Count Dracula's estate and return to L.A. with their purchases. Including Blacula's coffin! Well, I'm sure i'm not giving anything away when I say I think you can guess who the first 2 victims are. Blacula just gets rollin from there. Now I'm not exactly sure why, but Blacula is now at the funeral of the one of his victims, Bobby. Here he sees a woman, Tina (Vonetta McGee) who looks like his long lost wife, Luva. As if connected by fate, Blacula he reconnects with her and Blacula turns from bloodthirsty monster to a tormented soul who simply seeks the peace of his past life's love. Of course the "HERO" starts meddling and cock blockin our African Prince of Darkness.(No pun intended) Chaos ensues and in the end we have a blue/green vampire smackdown.(The make up is awesomely horrid) I never DID understand why Blacula got hairy eyebrows/cheeks when he "vamped out". Be sure to look for the Blacula tribute to DONKEY KONG in the end fight/chase scene. Again Blacula becomes the "sympathetic monster" in the films finale and to me, thats classy.
Now i can't really tell you anything else which you probably don't already know about this one, piglets. The bodycount rises as the vampirism spreads throughout the streets of L.A. This movie was $4.99 (you can find it just about anywhere for a similar price)and it is completely worth it just for the AWESOME social and fashion anachronisms. (Skillet and the club scene alone!) Even though this is the epitome of blaxploitation and all very tongue in cheek, there is some hidden social messages thru out the film. A lot of it has to do with the times. There are many instances of racism eluded to if not outwardly thrown at you as far as "the man's" view on blacks and gays. Its these "messages" that give this layers(although quite thin layers) which make this more than just another shlocky horror from the 70s. 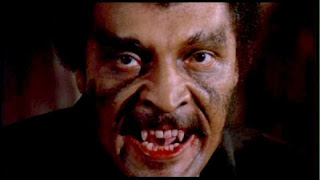 Now, i feel the need to share with you loyal readers a lil somethin that makes this movie so very special to me. Back when i was a young piglet of 7 or 8, yours truly was in a hospital, my mom was visiting someone and I was in the hallway left to my own. Out of nowhere there was a patient, an older woman, dressed in a hospital gown, came running down the hallway(In my general direction, not directly AT me). Her arms flailing, screaming bloody murder. She was restrained by orderlies and brought back to her room. Nothing terrible, right? It was a week or so later i watched an airing of "Blacula" on WOR tv, channel 9. Now there is a scene in Blacula... at the morgue... That's all I'll say. Scarred me for life because in my mind, the woman in the hospital has been replaced by that woman in the morgue.
If you can, I highly recommend you pick up this classic in 70's blaxploitation. So put on your 7 inch leather heels, your groovy butterfly collar shirt and pick out your afro and watch this flick with someone you dig.


WARNING: I offer this to you, if you happen to pick up Blacula 2: Scream Blacula Scream... even though it stars the always sexy Pam Grier and Mamuwalde's role is reprized by a returning William Marshall, please don't expect it to live up to the first one's entertainment value. That is all. 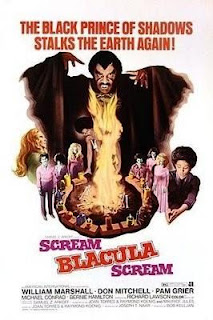 Posted by Rob Dimension at 1:52 PM