The Burning - movie review - This Pig is on FIRE!!! 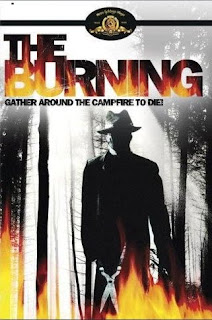 One of Ole Pigamortis' favorites. Ahhhh the 80's, how i love thee.

Take a group of unheard of teen actors as a group of horny councelors/campers, one horribly deformed, angry caretaker and the make up Fx of the master, TOM SAVINI and what you end up with is one of the greats in the slasher genre. The Burning is without question the epitome of the slasher in the woods story. The story itself is based on a campfire tale told at camps throughout NY and NJ. I remember as a lil piglet hearing about Cropsey at camp. Maybe its nostalgia that makes me love this movie so much. It brings me back to a simpler time. Before CGI and before those overused "twists" that everyone seems to be so fond of at the end of movies these days. This movie is pure and simple, killer + victims = one helluva movie.

The story is back in the day of Camp Blackfoot, some smug lil camper bastards decided to play a joke on the "creepy caretaker" Cropsey... As with all tales,things go horribly awry and poor Cropsey is burned horribly and hospitalized. He was released after skin grafts didn't take and the horribly disfigured(and bitter) Cropsey is set upon an unknowing world. Where do you think he goes? Thats right kiddies, right back to the camp. TALK ABOUT DEDICATION! Well, I don't s'pose Pigamortis would be givin away any endings if I tell you its camp shenannigans and blood and boobs the rest of the movie. "The Hooker" scene is memorable for gorehounds as well as a bit that got this movie banned in more than one venue. 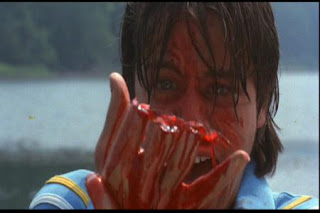 What is both amazing and amusing about this movie is the list of "Unknown" actors and actresses that appeared in this film who went on to do som pretty big things.
The likes of Jason "seinfeld" Alexander, Fisher "Short Circuit 1&2" Stevens, Holly "the Closer" Hunter, as well as the semi-known Leah "Bloodsport"Ayres, and Brian "Police Academy 4: Citizens on Patrol" Backer. We can't forget the others who we never heard from again who gave the movie that real camp feel. The acting was solid and they covered all the stereotypes, the hustler, the jock, the nerd, the pretty girl, the horny campers, they covered all bases here. They even broke some tradition (before it became tradition). The girl who DIDN'T wanna have sex got killed just as readily as the slut. They just don't make movies like this anymore.

I feel a big part of this was in part to the fact that there WAS no CGI, only physical FX and gallons of blood, done by the MASTER, Tom Savini. Savini actually turned down the job to do FX on Friday the 13th part 2 to work on "The Burning".
I remember watching some interviews with Savini where he talked about working on this film. The RAFT scene is incredible and well worth the wait. Your ole pal Pigamortis highly recommends you get your grubby lil hooves on this lil grisly morsel.
I HATED camp, but i LOVED this movie!

Posted by Rob Dimension at 6:14 AM