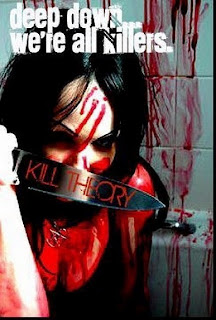 Director: Chris Moore
Call me a glutton for punishment, I like to consider myself an optimist. I'm a glass half full type of pig. I'm always lookin for that silver lining. Yeah thats my story and I'm stickin to it. Which is why I keep watching these After Dark Horrorfest suckfests! I keep hoping I am gonna see one that really does something innovative and exciting. *Looking at my watch* Still waiting, since its inception in 2006. 8 films to die for at 4 years, thats 32 films that had a shot at making me go "AWESOME!", "WOW", or at least "That didn't suck" At least they are consistent, The streak continues.*ZZZZZZZZZZZZZZZ* 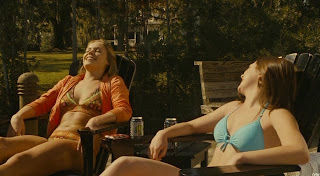 Kill Theory is however a slightly different take on the traditional slasher and mixing it with the oh so popular "SAW" flavor of the mastermind killer, without all those oh so interesting traps.(Cash in while people care, I suppose) A group of uber close college buds out for their last party weekend go to their pal's dad's cabin. Its here they toast their friendships and how much each one means to one another and basically sets up like every other killer in the woods flick. We have some rather forgettable character building and back story and then WHAM! 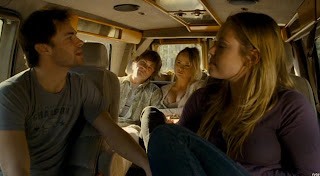 We're hit with the gimmick that they banked on saving the movie. An apparently all seeing/all knowing psycho has them trapped in the house and sends a chilling message of "Kill your friends by 6am or I will". 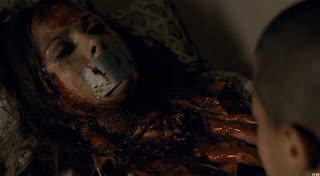 Now this IS an interesting twist, but hardly one that holds the rest of the movie afloat. Even with such horror greats as Agnes"Vacancy 2" Bruckner, Taryn "Crossroads"(The Britney Spears not the Ralph Maccio/Steve Vai vehicle) Manning, and Kevin "Strangeland" Gage (way too briefly), its really hard to care about any of them and you find yourself saying "If that was me, i'da killed all of you d-bags within 5 minutes of the first message from the killer."
This film WILL however have you and your pals watching it hypothetically asking one another "dude, what would you do if that happened to us?" The premise of friends having to kill one another face to face is interesting but it just falls short of being a "WOW, WHAT A THRILL RIDE". The film was shot well and the blood was passable (see fireplace poker.) But to this little piggie, its just a revamp of a slasher flick with the big "TWIST" at the end that noone would have seen coming because, well noone is that good at being cliche.
So maybe next years crop of "Films to Die for" won't kill me via boredom. I won't hold my breath. 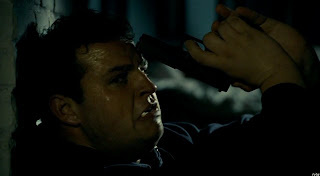 Posted by Rob Dimension at 6:52 AM