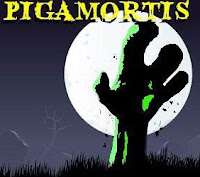 Well it was a great weekend. Got to meet lots of new people, picked up some great swag, and got the word out about the Late Night at the Horror Hotel show to a lot of people. Monster Mania 15 in Cherry Hill, NJ. I'm not one for being a fan boy or anything, but i gotta tell you just how much fun I had here. The people running the show were all very friendly and very accommodating to a couple of shmucks from a Horror Hotel.
I'm not going to review all the wonderful things that went on there because I am not even close to a good enough writer to convey all the awesome that is Monster Mania Con. In order to really experience them, you need to go there for yourself. That's a fact. First on the list and top of the attractions is the "reunion" of the cast of the Boondock Saints. Norman Reedus, Sean Patrick Flanery, and David Della Rocco. Not that they are horror related (although Reedus kicked ass in Carpenter's "Cigarette Burns") Carpenter also was top of the guest list at the Con. I assume this movie falls into the "CULT" status and thus why its lumped in with a horror con. I could be wrong though. Regardless, these guys were very cool, and way down to earth. IN ANY EVENT... This kinda what bugs me about the CHILLER CON (Even though in my opinion Monster Mania wipes the floor with Chiller) its filled with autograph sessions with stars from not only the horror/sci-fi genre, but people like "Ferris Bueller's Mom" and Richard Kline "Larry, from Three's Company". Now i know these people deserve to make a living just like everyone else does, but what in the BLUE HELL do they have to do with a Horror convention???
NOT a DAMN thing.

My only disappointment with not only this con but almost all the cons I have been to of late, is the lack of Independent filmmakers. There was a time when you could go to a con and find a plethora of tables with guerrilla filmmakers who scrounged and saved up to get a table at a con and peddle their latest film. I was saddened not to see any tables like this at Monster Mania. I hope this isn't a growing trend. I know with the advent of Facebook, Twitter, and mobile media, guerrilla advertising is optimal and the ability to reach hundreds possibly thousands of people, for no virtually no cash, but I guess i'm just an old, salty bastard who misses the old days when Indy filmmakers got their movies to cons for the masses who looked forward to seeing them.
Posted by Rob Dimension at 7:26 AM