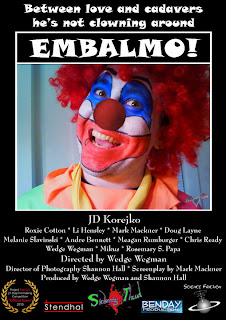 A few months ago, through some mutual friends, I was "wised up" to a local Philadelphia film making crew that was making some waves amongst the Underground. With titles like:
"DAISY DERKINS, DOGSITTER OF THE DAMNED!"
"EVIL BREW"
"Battle Nun: Key To Heaven"
"THE HALF-LIFE HORROR FROM HELL or IRRADIATED SATAN ROCKS THE WORLD!"
"UNWINDING"
"EMBALMO!"
I had a feeling I was gonna like these guys. I hooked up with Wedge Wegman and her crew through emails and saw her last week at Monster Mania. She is a Punk Rocker, with a no nonsense attitude, plus she knows what vision she has in front of her and I think we were instant BFF's...okay maybe not...hahaha.
Their latest film, EMBALMO!, will be screened at the Project Twenty1 film festival during the weekend of October 1-3, 2010 and we are wishing them the BEST of luck. Okay, so enough of my babbling on...here is what she sent me today:
There is little else in the world that goes as well together as campy horror and sketch comedy, a fact that is proven once again by John Cannon, Rob Dimension, and Pigamortis on the Late Night Horror Hotel. Just after I was introduced to Dimension, he sent me two episodes of this mysterious show I'd never seen. With great trepidation, I put on an episode one night. And I was HOOKED! After greedily watching the second episode on the disk I found myself wanting more.

Dimension and Cannon play off each other quite well during the breaks in the films. Where some horror shows cut into the film at inappropriate times, these two seem to interject their dorky/ditzy humour at just the right moment. PLUS, they pull out the prop gags, something that I absolutely adore. (Cheese-STAKE, anyone??!? PRICELESS!)


The most impressive thing about the show? The hosts are down-to-earth, approachable guys who TRULY love this genre. This isn't about money or fame, folks. This is DIY fandom at it's best, and the Late Night Horror Hotel delivers a WIN!!

Read more about Sickening Thud here:
http://www.myspace.com/sickeningthud
Posted by Rob Dimension at 8:39 AM