Late Night gets some love from Kristy Jett 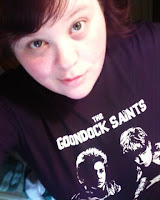 Late Night gets some Love from Kristy Jett
Some mornings it's so nice to wake up and have someone recognize what your doing as a Positive. Today, I woke up to Kristy Jett's post about the Tv show and the crew behind it. I am truly flattered that someone like her took a few minutes to give us a shout out.
For those who don't know Kristy (can't believe anyone out there doesn't know about her) she is one of the most kind and nicest people you will ever meet, seriously. She is the editor for The Blood Sprayer, she is a contributing writer for numerous sites like Fangoria, Dread Central, Ax Wound Magazine and works for the coolest Horror based T shirt company - Fright Rags. She is all over the net and has a passion for horror and is truly talented.

She had a few things to say about our show - Speaking of Dimension, "Not only was he as friendly online as he was in person, but he also had a gang of equally awesome cohorts flanking him. This included his beautiful wife, and his two adorable kids. Not to mention the sexified John Cannon and the terrifyingly awesome sexpot known as Pigamortis Wrex."

We just wanted to say, Thank you for recognizing our hard work Kristy, you are Fantastic! To read her entire Blog - Visit here
Posted by Rob Dimension at 4:08 AM