What the heck is a DeadNeck Dave? and who is Rhonda? 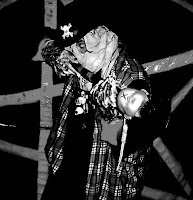 DeadNeck Dave - Straight from the Grave gets a job?
So, we just got off the phone with John Cannon and he was as surprised as anyone else. When asked "Who is DeadNeck Dave?", this is what John had to say, "I don't know any DeadNeck Dave, but seeing as you are asking me about him, I can assume we have a new employee at the Hotel." Cannon also added, "While we have been shooting A Lot of episodes and footage, things are spiraling out of control. Since the arrival of Pigamortis, the flood gates have opened with mayhem. If dealing with Dimension hasn't been bad enough, wait until you see just how bad things get."
We tried to call Rob Dimension and of course, got no answer. We are starting to think he can't operate a phone but, we did hear from Pigamortis, who from the sounds of it, was partying very heavily. "DeadNeck Dave is straight from the Grave, ya know. Him and Rhonda are gonna handle the gardening and hopefully they don't have any knock down drag out fights. If Deadneck Dave needs to punch someone, I volunteer Dimension".
From what we are learning, DeadNeck Dave (and we are assuming Rhonda) will be at MonsterMania (www.monstermania.net) in Cherry Hill, NJ this week with the rest of the Late Night at the Horror Hotel crew. Stop by the table and check out the pre-orders deal for "Freshly Squeezed Kaijuice", their big 2 Hour Extravaganza release.They may also have a pre-order for the next 2 episodes featuring The Monster Walks and The Corpse Vanishes that introduce Pigamortis Wrex.
Posted by Rob Dimension at 2:28 PM