Rob Dimension finds a Dead Hooker in a Trunk and smiles 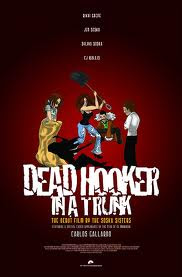 Dead Hooker in a Trunk review
by: Rob Dimension
As I shift through my pile of Dvds of yesteryear and today, looking amongst the many to review…one title sticks out: “Dead Hooker in a Trunk”. The title alone makes me smile, for some that will disgust, but come on, we are Horror fans right? Think about it - a dead hooker, hot girls, gore and the simpleness of fishing line re-attaching an arm...how much better can it get?
The deeper I dig into the background of this film, the more I am delighted. Female directors and writers are finally getting respect they deserve and the go ahead to release some insane flicks; The Soska Twins, who apparently are very warped, just ripped a big hole in Woman’s Rights in film making. Jen and Sylvia Soska are Canadian twins who, while extremely cute are also, more importantly, extremely gifted. My hats off to them, Dead Hooker in a Trunk will be fully endorsed by me...the movie, that is.

Dead Hooker in a Truck is one of those little films that could. A small cast of very determined talents and a cleverly written script make this a grand slam, at least for me. Did you ever wake up after a night from partying and not remember how a dead hooker gets into your trunk? Me either, for some...this can be a problem. That’s the premise, but that’s only the start. 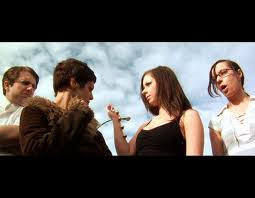 Our four characters are The Bad Ass portrayed by Sylvia Soska and her sister the Geek, played by Jen Soska are joined by the Junkie (Rikki Gagne) and Mr. Goody Two Shoes (CJ Wallis) as they try and avoid the Police, a Brutal gang with torture on their mind and an insane Serial killer. Never knowing what’s next for the foursome is what makes this one a winner. Twists and turns and some incredible gore keep you watching, plus a fantastic musical score add to the excitement. The ability to not take themselves serious is also a big winner for me. You can tell that the cast loved making this film, it transfers to film perfectly. 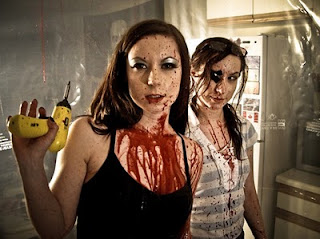 For this being the Soska’s first feature film, I really cannot wait to see what they have coming next. This film is making its way around the Festivals and I will be willing to bet, it will get even more recognition. For more information on the Soska Twins and Dead Hooker in a Trunk, please visit www.twistedtwinsproductions.net –

Here is the trailer. Enjoy!