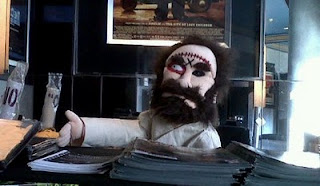 My Weekend with Hack the Zombie
Okay, so Thursday as I am loading up the car...I hear "Yo! Dimension...when are we going to get some girls?" Instantly, I try to ignore my new found companion, but he is relentless. I explain to Hack that I am headed to the County Theater in Doylestown, PA for Cyborg1's release event of Marvel Universe vs. The Punisher written by Jonathan Maberry. He gets his mini book bag together, that had numerous paraphernalia inside, that just will NOT be discussed here and heads to the car....Okay, I guess he is going.

Synopsis directly from Jonathan Maberry -
The short version is that a pathogen is accidentally released that was designed during the Cold War to allow humans to adapt to climate changes resulting from a nuclear or biological war. The pathogen changes human physiology so that it can survive in any environment; and it amps up the aggression/survival instincts. Unfortunately, it was never fully tested and it has dreadful, unforeseen side effects. The Punisher is there at the time of the pathogen's release and gets a "super dose" of it, which renders him immune to the effects that transform virtually everyone else on earth.
I had a chance to read this and I totally am loving it. Violence, fantastic artwork and a solid story that will keep Frank Castle busy. This is a 4 part mini series and should be an instant hit. Go get your copy of Issue #1 RIGHT Now...or I will send Hack to your house and you can deal with him....yuck. I will have a better review soon, probably the end of the week!

So, we arrive at the Theater and it was a blast, they showed Punisher War Zone. Hack, after offending numerous women in the lobby, decided to go sit and watch them movie. If Hack ever wants to show you his "Popcorn Box trick"...please just walk away. The County Theater is an great throw back to the theaters of old. It's quaint, the employees are all friendly and helpful..a great overall experience.
Look for our interview with Jonathan Maberry soon, he was an awesome guy to discuss Horror with. He has numerous titles coming out soon including Wanted Undead or Alive - Vampire Hunters. His co-Author Janice Gable Bashman was there too, she was very helpful and we look forward to hearing and possibly working with them again....very soon.
It's time for us to head out, I go round up my drunken "friend", who is now passed out in a puddle of his own urine...yes...he is pleasant to travel with. I now am going to gear up for Saturday's appearance at the Tattoo and Piercing show! 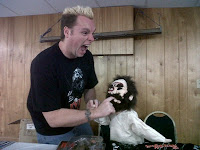 Eastern PA Tattoo and Piercing Show in Broadheadsville on Saturday, was so much fun. Live music, the atmosphere and everyone involved. I have the "Hearse" loaded with all kinds of goodies and I'm on my way...about 1/2 way, a face pops out of one of the boxes and you guessed it...Hack is coming with.
I go over the rules with Hack...yes, I actually had to establish rules.
I am under the impression that we have an understanding. We start to unpack and I see Hack already asking (rather loudly too) "Who wants to tattoo me? I'm famous!!." Luckily no one took him up on his offer and Hack remains tattoo free. At one point, as you can see, he bit me....yes..he is a biter!
We, both did our best to expose people to our show, well, I at least just tried to keep the exposure on our show. We made tons of new friends and everyone was extremely awesome (if those even go together) - plus we are hopeful to close a deal with the Altered Nightmare people. They have, what looks like, the scariest Haunted around.

Huge thanks goes out to Kevin Bond and his Wife Nanette (these 2 just did a fabulous job at running this event), Snort Gore, who has the SICKEST Frankenstein Tattoo I have ever seen, The good people at Strength in Hope, a suicide prevention reach out group and all the artists and bands. We are hoping to spotlight some of the bands music soon on the Tv show or right here...online!! 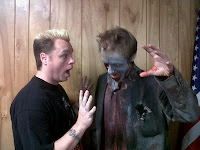 Stay tuned for more news, reviews and Interviews as we are really gearing up for what looks like an Incredible Halloween Season!! We are still taking Convention bookings and guest appearances. Just give us an email at LateNightHorrorHotel@Hotmail.com
Posted by Rob Dimension at 7:38 AM