Hack The Zombie makes his appearance 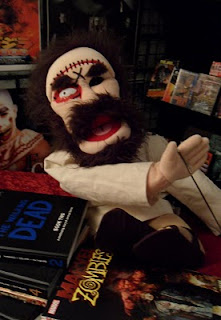 Hack The Zombie makes his appearance


On our latest episode of Late Night at the Horror Hotel, in post production right now, we host "The Corpse Vanishes" starring Bela Lugosi. Rob Dimension and Pigamortis really did the unthinkable!!!
After being left with a disaster of a mess on the counter, behind the counter and even under the counter in the Hotel lobby, John Cannon was stuck cleaning up after the two knuckleheads when he stumbled across the "Book of the Dead".


It seems that Dimension and Pigamortis tried to revive a plant, that was plastic, hence their FAILURE and John put 2 + 2 together. He figured out that a walking, re-animated corpse is now a permanent resident at the Hotel.

So much for doing laundry...we now have a Laundry Room of Resurrection in the Hotel basement!!!

Early footage has surfaced of Hack, one can only wonder what else is in store for this show!!