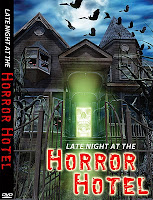 The DVD can be autographed - please add what you want on the instructions box while checking out! We are currently only shipping within the US! Sorry.

Late Night at the Horror Hotel delivers the very best of the very worst in classic B horror films. Join Rob Dimension and John Cannon, plus a few surprises, as they host some of the most forgettable films to ever grace the small screen. Plenty of laughs, wacky antics and a few recipes are on the bill for tonight’s show….grab a seat, enjoy your stay and check in at Late Night at the Horror Hotel.

Night of the Living Dead (1968) – The George A. Romero classic about the “Dead walking the Earth” is our feature for tonight, unfortunately, the graveyard shift are the ones watching it. Rob the Clerk (Rob Dimension) has decided to hold a telethon for the “undead”…while Chef John (John Cannon) can only sit and watch this disaster unfold. No Zombies were harmed during filming of this program, only their reputation. Running time approx. 60 minutes

Plan 9 from Outer Space (1959) – Join the guys as they watch Ed Wood’s science fiction/horror film about Aliens and Zombies. Sounds pretty good right? Nice, got you fooled…err...well; at least Tor Johnson and Vampira are in the movie. Chef John (John Cannon) gives a great recipe for Turkey Meatballs and Rob the Clerk (Rob Dimension) serves up more nonsense. Have some fun as we present the plan that actually worked, Plan 9 from Outer Space. Running time approx. 60 minutes

Be the 1st on your block to own Late Night at the Horror Hotel's first DVD release. This is a professional quality release and is shipping right now...LIMITED amounts!!. Questions? Email us at RobDimension@msn.com 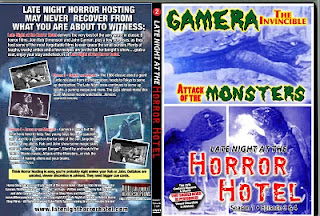 DVD Can be autographed - please add note when checking out - We are only shipping within the US, currently

Episode 3 - Gamera the Invincible - The 1966 classic about a giant Turtle released from it's hibernation, heads to Tokyo to serve up destruction. The Late Night crew continues to serve up laughs, a yummy recipe and more. The guys almost make this Giant Monster movie watchable...Almost. Episode approx 60 mins


Episode 4 - Attack of the Monsters - Gamera is back but this time he is here to help. Two young boys board a spaceship and travel to a planet on the far side of the sun, targeted by brain eating aliens. Rob and John show some magic skills and talk about "Stranger Danger". Stand by and watch the 1969 B Movie classic, Attack of the Monsters...or risk the chance of having aliens eat your brains. Episode approx 60 mins 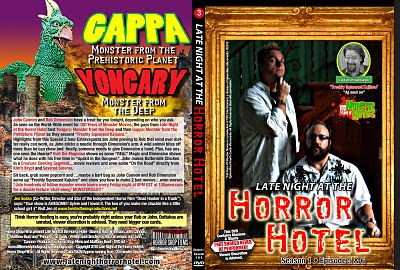 "You saw some of it on 100 Years of Monster Movies...now see what we couldn't show you!! Watch it all - 2 Hours of "Freshly Squeezed Kaijuice" - This DVD has gotten RAVE reviews already.  Don't wait - Only $12 shipped in the US!!

John Cannon and Rob Dimension have a treat for you tonight, depends on who you ask. As seen on the World-Wide event for 100 Years of Monster Movies, the guys from Late Night at the Horror Hotel host Yongary: Monster from the Deep and then Gappa: Monster from the Prehistoric Planet as they present “Freshly Squeezed Kaijuice.”

Highlights from this Special 2 hour Extravaganza are John proving to Rob that mind over matter really can work, as John sticks a needle through Dimension’s arm. A wild animal bites off more than he can chew and  finally, someone needs to give Dimension a hand. Plus, has anyone seen the Hearse? Kurt the Magician shows us some “REAL” Magic and Dimension shows what he does with his free time in “Upskit in the Dungeon”. John makes Buttermilk Chicken in a Creature Cooking Segment…movie reviews and even some “On the Road” directly from Kim’s Krypt and Severed Sinema.

Sit back, grab some popcorn and …maybe a barf bag as John Cannon and Rob Dimension serve up “Freshly Squeezed Kajuice” and show you how to make 2 bad movies…even worser. 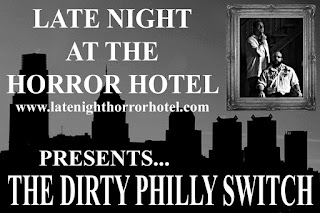 The Dirty Philly Switch Card Trick
$9.00 shipped anywhere in the US!!

"Ever heard of the 3 Card Monte? You might be ready for the Dirty Philly Switch...You Can NOT Lose!!!"


If you have seen it performed, you know how easy and effective anyone can pull it off. The crew from The Late Night at the Horror Hotel show are always traveling and entertaining (or trying too); this trick breaks the ice and is excellent to trick your friends with.


Based on the 3 Card Monte, this version has a twist and you simply cannot lose! Being from Philly, we are always being accused of talking to fast and trying to pull a fast one, this is exactly the case here. You are giving your “Victim” a 50% chance to pick the “Money Card”, but they never will and it’s in plain sight. The “Money” card will be gone, nowhere to be found…like it had been switched!

This Trick comes with easy to follow instructions and is ready right out of the package...fool your friends!! This Trick is Skill Level 1 (Easiest) but is super effective - when you see Rob and John in person, ask them to perform this for you, just don't wager any money!!


Questions? Mental help advice? We need them - send them to - RobDimension@msn.com

Posted by Rob Dimension at 8:31 PM