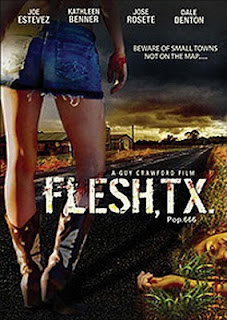 So we allllll know "The Saw is Family". This however does not mean that all cannibalistic kinfolk from Texas use the saw for family business.
Enter Guy Crawford's "FLESH,Tx".

*I am not counting the "reported deaths" or "eluded to deaths" just the ones shown onscreen.

So where do i begin? The movie starts off like a shot with a pair of door to door bible thumpers spreadin the good word of Jesus. They come to a rundown house out in the midst of what you would assume to be nowhere and come across a momma and her her daughters. After an all too friendly welcome we are treated to a slashed throat and a stabbing for apparently no reason. (Although do you EVER really need a reason to hack and slash door to door God Squad types?) So far... the movie is off to a good start.


We jump on over to the local bar, where 2 "biker" fellas(Neither guy had a HARLEY)after what we can only assume was a long ride stop in for a couple of brews only to find that this place in the middle of nowhere only serves PABST BLUE RIBBON! (ain't nothin wrong with that!) 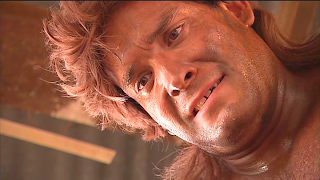 Its then that they are approached by Sugar Barley. A sexy lil number who had this low budget,Baby Firefly thing going on. She starts flirting and hits on one of the biker guys and of course easily gets him to ditch his friend and take her home.
I'd like to interrupt this review for just a moment for a lil piggy pop quiz:

You're an average (at best) Joe and a gal who you probably could never PAY to pee on you if you were on fire, let alone touch you in a sexual manner (Dimension knows what I mean) comes up to you and propositions you... She is what?

A) She is a poor, lost, soul who needs your help her and you'd
better take her home before some other guy with less morals
than you takes advantage of her.

B) She is simply blown away by your big city charms and down to
earth demeanor and simply MUST be yours!


C) She is a crazy bitch who will take you home and butcher you.

I know as men we are hardwired to think with the little head but,c'mon...
If you answered any answer but C) you are a tool and you deserve what you get.
We now return you to our review, already in progress.

So fella gets brought back to the rundown house we saw earlier and Sugar (who keeps doing this really cute thing with her eyebrow) introduces this moe to the rest of the BARLEY clan: Momma, Jonas(Pa), Fancy, Butter, and Woody, the mullet wig wearin, beefy,studdering,swearing jacktard. As you my dear reader can already assume, things do not end well for our biker shmuck. 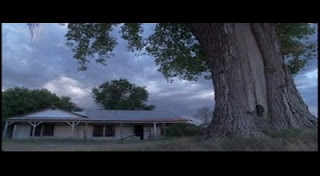 So far, its been a decent movie, i mean we are only 1/4 way in and although i don't mind low-budget movies, the low budget feel is clearly here. Its here that we are introduced to the unlovable mother/daughter team of Donna and Tabitha Parker. Traveling cross country to get to California to "start over" after an ugly divorce, where Tabitha blames her mom for the problems with her dad. Or at least that is the back story laid out in an awkward conversation between the mother/daughter in the car.


This conversation's awkward level is only compounded by the heaping shovel loads of attitude both characters give off, making them both rather unlikeable.
They pull into a gas station for a pee break and it is here that Sugar Barley runs into our duo and Tabitha ends up on the back of a milk carton. Upon calling the local sheriff, who turns out to be Sugar's pa,Jonas Barley, who really doesn't help her at all.


With her daughter gone, and little help from the locals, Donna begins her own investigation. One that leads her to the local bar, (the one that only served PABST)where we are treated to a cameo by B-movie staple, JOE ESTEVEZ. He plays the town drunkard, Henry who in a alcohol induced, pre-passout babble gives Donna some clues(?) that something sinister may have happened to her daughter and that Sugar and the Family maybe involved. Henry goes on (and on and on and on) about forgiveness and turning his back on evils and blah blah blah. (the filmmakers squeezed every cent they paid for this cameo out of Estevez) The sheriff shows up to chase Donna off and to "take Henry home" (to see his maker). 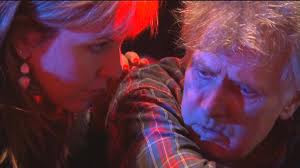 SPOILER ALERT! (I say this with a fairly decent amount of sarcasm because i feel that the movie has been fairly predictable) We find out that Tabitha has not yet befallen the fate of the other folks in this movie but is being saved for SUNDAY SUPPER and needs to be fattened up. (Although how fat can they get her in a week feeding her a handful of ritz and an apple half?) Woody, is the family kick around as demonstrated throughout the movie by the other family members, especially Sugar. When Woody needs to bring Tabitha her meal, she plucks at his big, dumb heartstrings and not since "Milo and Otis" has a more unconventional friendship been formed. Also not since that movie has there been such an overwhelming amount of ADR in one scene. Pretty much the rest of their conversation is all overdubbed which really works well with Woody's stuttering(note sarcasm) And when things get fouled up and Donna gets closer to finding her daughter, when Pa gives Woody the order to "Kill Tabitha"... well we all know where this is heading.


Donna eventually follows the trail back to the FAMILY house and with ninja like skills, silently enters and is treated to a house of horrors. where various other "children" of the family live and apparently baby bird each other for meals.
[I would like to at this point give kudos to CARL HAWKE the set designer for the kick ass poster of WAYNE NEWTON in the murder house!]In a confrontation, Donna knocks out Fancy Barley, the oversexed mute and is confronted by Momma Barley and learns the "secret" (that we all knew from the opening scenes) of the cannibal clan and that her daughter was next on the menu, as well as being given some really helpful tips on parenting by Momma. Our still unlikeable, Donna is knocked out and Woody is to take her out back and strip her of her clothes and burn em. No one get excited, there is 0 nudity in this film. Its here that we learn that Woody and Tabitha's friendship has blossomed and he reunites mother and daughter, only to be stopped by Sugar. This culminates into what is possibly thee weakest, unsexy cat fight ever ending in someone getting pitchforked in the guts.


What is really odd is the message they try to convey (kind of beating you over the head with it really) that sometimes we don't always like our family but we should always love them because after all they are family.
I am leaving out some of the "twists and turns" of the film, that didn't really add much in my opinion.


Flesh,Tx had potential. The cinematography (Guy Crawford) was actually rather impressive as there were some great shots throughout the movie. For its low-budget roots the movie was rather well acted, I've seen worse in bigger budget flicks. The FAMILY seemed to be a bit cliched. We've seen this redneck, cannibal family before in various inceptions. The characters were very two dimensional and aside from Sugar being amazing eye candy, the rest of the cast really had nothing to offer. The characters of Donna and Tabitha just hoping that they would have both been Lunch and Dinner for the Family. That's saying something when you're actually less likable than the CANNIBAL, INBRED, PSYCHOPATHS in the movie. You just couldn't get behind them at all. I also think the air of conspiracy the movie wanted to convey just fell short. Who do you trust? Who in town is in on it or worse yet, part of the Family? You just really didn't care.


The main gripe of the movie was the terrible sound. The poor ADR, the background noise which at one point drowned out the dialog,some glaring editing slip ups, all in all it simply detracted from the over-all film. The FX (Randy Arbogast)and Make up FX (Michael Peterson, Sarah Catherine Renshaw) were rather mediocre, although there wasn't all that much blood in this, sadly.


The moral of the story, don't talk to hot girls at gas stations or bars, better yet take a map and avoid FLESH,Tx all together.
Posted by Rob Dimension at 8:22 AM