Pigamortis and his Zombie Pig Pen review - Path of Torment 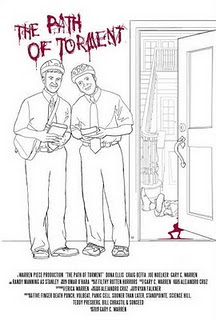 Pigamortis and his Zombie Pig Pen review - Path of Torment

Ok piglets... this is my first review for the Horror Hotel and i don't wanna disappoint. I do so hate to be negative. Hehehehe. If only Dimension would have given me a better movie for me to review...that nerd.
I would like to first start off by saying that I won't go into any details that could be considered a "SPOILER", because I do support independant films and regardless of my feelings on this film, i commend Gary C. Warren and his cast and crew for making independent horror.

Path of Torment
Written and Directed by Gary C. Warren


The Plot? Two Bible types come to a quiet, suburban household and for reasons revealed throughout the movie torture the inhabitants and murder their friends and neighbors. I know that is a very general explanation, but this movie was swerving all over the road. I'll give it this much, it's ridiculous first premise, (there are a few in the movie) make you go "WTF?!" but as it goes on, it devolves in simplicity and i think that is the direction it was meant to go and personally think they should have stuck with from the jump.


We start off with a party scene. I LOVE party scenes! ESPECIALLY scenes where its all ADR (Sorry for the tech terms, thats Automated dialogue replacement ) conversations amongst party guest you could only HOPE for psycho killers to come in and murder each and every one of them. For reasons beyond me, (I guess i'm just not smart enough to "get it") there was this blurry effect going on throughout this scene that nearly made me puke, mostly because it was blurring what was already a 1/2bottle of Yukon Jack night.
One of the first of these interactions was between a white guy (who tries to legitimately use the word "WORD")in a conversation with a black fella in a conversation consisting of " Hey, what was the name of that song? You know the one... you gotta fight, for your right to party? or some shit." To which the black fella replies "THAT SHIT WAS TIGHT, CHIEF!" and high fives him. 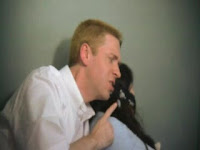 SERIOUSLY? Then the proceed to drag on the joke of mixing up every 80s rock band. NOONE is that sucky at trivia. This is a very contrasting irony in characters however and is only relevent after we meet... ehhh,we'll get back to that later. Anyway, the party scene goes on and ends with the death of the hunky cop BOBBY ST.CLAIRE. ALL of this BEFORE the credits.
So now our story REALLY begins and starts travelling at break plot speeds down hill with no brakes!
We are now introduced to KEN and ELLEN, our happy couple and Eli and Todd our door to door bible thumpers. Their happy lives all intertwine like a Tarantino movie without the pesky storyline or expensive talent.


Let me take a second to talk about the talent in this movie. Now, i understand the whole low/no budget tactics of filmmaking. You use what is available to you.
SO i can only ASSUME (and this is just my assumption) that the actor who played KEN (Craig Beffa) must have nekkid, incriminating pictures of the Director. Maybe he is a brother-in-law or son of a favorite aunt. Or maybe they just didn't have anyone else for the part, but seriously couldnt they have waited till AFTER they shot the movie to sedate this guy? Ken was blander than a ricecake soaked in water. They cut your finger off, broke your arm and cut all up on you and it barely got the guy to open his eyes all the way. I mean c'mooooon i know the fella who plays Eli throws punches like a bitch (Pigamortis Tip: Get a better punch sound effect) but even Eli's limp wristed punches should have gotten more of a sell from you and your wife.
The worst offense was during a calm conversation between Ken and Todd while Eli is allegedly raping Ellen in the next room. (I say alleged... they explain it in the movie.) Also, i'd like to just go on record to say there is no WAY doughy Ken got Ellen. She was WAY outta his league, but i suspend disbelief for the sake of the movie.


NOW, lets get to the character that although you're supposed to hate him, today's society of people who watch these sort of movies usually end up LOVING, ELI (Writer/Director/Editor/Producer/Star, Gary Warren) I probably would have loved this fella too if all the dialog didnt seem just a lil too contrived and forced. Its obvious Warren loves movies and useless trivia much like i do, however even I got bored of all the tv references. The dialog was trying WAY WAY too hard to be smart assed, flippant and bubbling over with pop culture references. Noone seemed naturally able to "keep up" with Warren's character. Even he seemed to be just go thru the motions in a few scenes and making the references just for the sake of doing it as if trying to fill some pop culture quota. The Spin-off conversation he had with Ellen (his captive, mind you) was just as if 2 folks met up on a match.com date and tried delivering some Kevin Smithian dialog to one another. It just didn't work. The dialog tried, i mean REALLLY tried to be fun, it just fell a little short.
One of the most ironic moments in the movie was when Warren's character after a rather funny rant about how much theatre actors suck says "See? Anyone can act now go fuckin screw..." Not anyone, 90% of your cast can't.

The deaths in the film were reallllly tame and I understand not having a "big budget" but c'mon. I hope FILTHY ROTTEN HORRORS, the FX team responsible for the "GORE" in this movie didn't charge Gary Warren for their services. I used the quotes because aside from Stanly and the corkscrew death, (the Winner of the BEST DEATH IN THE MOVIE award) there was very little gore and the FX were barely passable. They just seemed to not really care. I've seen high school films with better FX. Even the blood was watered down and weak. I'd also like to say to the filmmaker, there is NO way that "Studdering Sideburns" could ever fit in that freezer in the garage.

I would also like to say that I in no way am some politically correct, knee jerk reaction type of pig who gets "grossed out" or "uncomfortable" when things get edgy. That being said, the hanger scene in this movie was really lame. If you're gonna go for that kinda hit, you'd better follow thru and make sure you connect. Unfortunately, you missed by a mile with this scene. Either go big or don't go at all. If you were going to do the scene, at least spill a little of the red stuff, man. I know you're budget was probably limited, but jeez i have a couple of great recipes for cheap stage blood that looks a helluva lot better than what you guys used.
The soundtrack for this movie was decent and all of the songs were fairly decent, I'll even go as far as to say some of the songs were damn catchy. I feel like maybe they tried to cram all the songs in and its variety seemed to jumbled. It went from a catchy lil song to death metal to ska. Much like the movie it was all over the place.

After all of the twists and swerves and flashbacks (completely neccessary by the way)in this movie, the end reveals the true motives of "ELI" and its almost as if I felt better about the movie. I felt like yelling "WHY DIDN'T YOU JUST DO THIS FROM THE BEGINNING???" It by no means saved this movie, but i couldnt help but smile a bit at the end scene. I was also impressed with the last shot of the film. (Pre credits)


Lest I be irresponsible, i feel i must pass on that this movie DOES come with a message, "Beware the internet!" Heed that message, piglets!
Posted by Rob Dimension at 4:32 AM