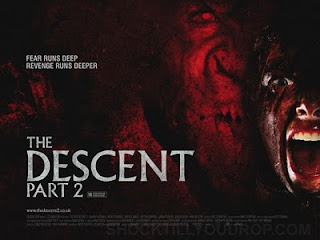 The Descent (2005) caught a lot of people by surprise when it released. I remember getting a ...ahem.."copy" of the this and was pleasantly surprised. Underground caves can be scary on their own, claustrophobia will rear it's ugly head as soon as the walls tighten up on anyone. Remember, breathe and slow your heart rate down...it would never work, I would just flip out. Watching the original, I had the sweaty palms and staggered breathing , just waiting for the next rock to fall.

The Crawlers (the underground dwellers) added even more suspense to the film. Creepy, crawly and just outright gross. Blind with a sense of smell and hearing, the crawlers were out for blood.
The Descent 2 picks up right after part 1. Our heroine, Sarah climbing out of the caves covered in blood finally is rescued. With no memory of the shocking events or her friends horrible deaths, Sarah is questioned by the Sheriff who decides to take her back into the caves. Bad idea....
I, as always will not spoil anything for you, I will lend some simple Horror Movie survival knowledge and somethings to watch for. I enjoyed this movie...too a point. The common sense factor for this goes right out the window right from the start. Everything that wouldn't happen or shouldn't happen..does. Sarah would never be taken out of the hospital, after 2 days and drug back into the caves. The Sheriff and his female deputy know nothing about climbing or survival in the caves and they are joined by 3 experts.
The biggest uphill battle for this film is that the "closeness" of the cave has already been seen. It's hard for them to add new scares to something that they already exposed in the first one. The Crawlers, the shock value is gone..we know they are down there. The simple glance for a cheap scare is gone...now you have to have a solid story to carry this film. The gore is decent, I hate that the blood looks so reddish...it is almost distracting.
There are some fun scenes, some good scares but just not enough to make this a "BUY"...I kinda rate movies now on if I would plunk down $15 on them. With so many junky films out there, it just is hit or miss. This one is a watch 1 time and maybe again if it's on cable or becomes an instant watch on netflix. 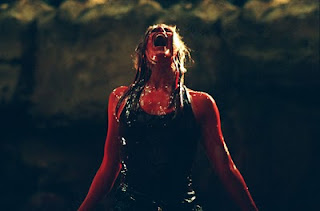 Bottom Line - if you liked the original, at least check this one out. There is a small twist at the end, which can be explained more in a future film (not sure if it will be), but maybe that can add some zest to this series again. A lot of times when you deal with a location that is natural, the viewer can relate but once they have seen it it looses it's fear. There isn't enough "new" scares to make me say "Oh..that was awesome". I really liked the 1st one and would highly recommend that to BUY, the 2nd...maybe a rental.
Posted by Rob Dimension at 12:41 PM