Updated locations for the "Tour of Terror" 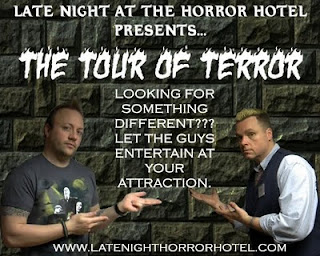 "Tour of Terror" heating up!!!

The summer is getting hotter and more people are watching our show, we are all super excited!. The Tour of Terror is gaining speed with a bunch of new dates added plus, more dates in the works including more Haunted attraction appearances. Wait til you see what the guys have going on.

First - 4th of July is quickly approaching, so our 1st stop on the Tour of Terror is Kim's Krypt located at 1748 Merritt Blvd. in Dundalk, MD, just outside of Baltimore. Rob Dimension will be there "with bells on", so he says with his video camera looking to seek out people who want to talk! We know... just humor him...plus, you can be on our website or TV show!


Other NEW dates added - always check our top left side of the site, new dates added all the time


August 5th - Punisher Vs. The Marvel Universe film and comic release event - details will be coming soon, we will be guest hosting this event, with a fantastic Comic Writer (name announced soon) in Doylestown, PA courtesy of Cyborg One comics. Watch for some exciting news with this event. It's a Thursday Night, you gotta come out!


August 7th - Eastern PA Tattoo and Piercing Convention - Gonna be a great day for a Tattoo, I know when is there a bad day for one...come out to Stroudsburg, PA more info - www.epatps.com


August 27th - Exhumed Films - The Late Night guys will be in the house...we will be selling our latest dvds, talking and watching some scary flicks. In downtown Philly, Exhumed Films has been a popular cult spot for Horror fans for the last few years. Great night of great films- We are excited and honored to be there! http://www.exhumedfilms.com/


October 2nd - ZoloWeen Toy, Comic and Costume Convention -  anytime Toys are involved, Rob smiles and John shakes his head....gonna be great as Late Night comes to Willingboro, NJ from 10am - 4pm details are at http://www.amazingtoyshows.com - come on out and see us!


If you are interested in booking the Late Night at the Horror Hotel crew - send an email to LateNightHorrorHotel@Hotmail.com 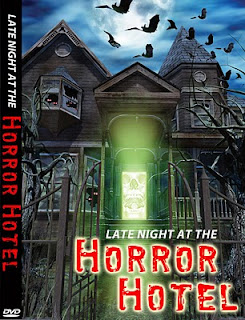 This is just a start, we are in negotiations with several Conventions, Haunted Attractions and more for the month of October, stay tuned and keep watching.


Next week we will be pre-selling the DVDs for Episodes 1 & 2- here is a sneak peak of the cover, plus the outtakes might be worth the price. They will retail for $12 dollars and are purty!

Posted by Rob Dimension at 5:02 AM