A little behind the scenes - goings on... 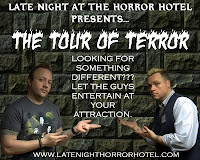 "A Little Behind The Scenes"
By: Rob Dimension
Well, yesterday (June 3rd) was something. I figured I would share some of the stuff John and myself do/go through to make the show better and different. We talk just about everyday and try to keep the website updated as often as possible.
I started off my day heading to the local Comic Book shop to grab my weekly reading material, normally this happens on Wednesday but since it was a holiday week, it fell on a Thursday. Picked up :
Brightest Day #3 - DC continues to be amazing - Aquaman is no longer a pus....lol.
Avengers Prime: Siege Aftermath #1 - Asgard has fallen and Thor, Cap and Iron Man are left to pick up the pieces.
(Reviews will come next week for the above titles) 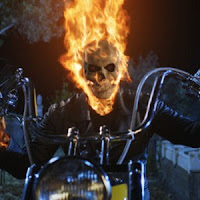 Anyways, I meet John at our Studio and prepare for our "Ghost Hunt/Debunking" experiment, keep in mind - I have NEVER done anything Ghost related. John has tons of equipment and has worked for and done numerous Ghost hunts. He has shared some of his freakiest moments with me and I am always skeptical. Notice the Ghost Rider pic? It has nothing to do with our Ghost Hunt, just gives me a chance to mention that Nic Cage owes me $8 dollars for watching that turd of a movie.
We will discuss fully what we did, what happened and both of our thoughts after all the evidence is reviewed. I will give you a teaser though - "There was a point during our questioning of the ghost/entity that we were all thinking something was there. Camera Man Mike said his heart was racing. It was a very tense 10 minutes." Watch for it.
We then proceed onto our standard writing, researching for ideas and material for our upcoming episodes. While our shows will have an underlying theme, expect more sketches. We are really trying to provide a little bit of everything into the shows plus, more stuff for the website. I expect with every new batch of episodes, we will get better, since we are both new at this. We are gearing up for a lot of personal appearances and will have our Camera crew in tow, plus we will both be at Wizard World Philly on Saturday June 12th, look for us.

After the thrilling afternoon, we headed to Kurt's Magic World in Lansdale, PA. I will give you guys some insight as to our thinking, it's usually flawed which makes it even better. We are preparing for our upcoming "Tour of Terror" tour and we want to present more than just a standard hosting gig, for many we want to have a stage show. Comedy, movie trivia and some Magic...not bad right? So, I am a huge MARK, plain and simple ( here is a description of what a Mark is, it's a Carny term - A customer that spends a lot of money trying to win a game. This term was coined because carnies would alert each other to the big spender by marking him some way ,usually by patting them on the shoulder with powdered chalk in hand). My translation is - Very Gullible. That just makes it even more dangerous to hit a Magic shop since, it's like a giant kid in a candy store.


The owner wasn't there but John, his assistant, was which of course had both John and I buying some new tricks. I don't want to give away anything, but it should be a lot of fun. I will probably go down as the Worst Magic guy...ever (note: I did not say Magician, that would insult so many magicians)!! I have 0 skills, so if anything...everyone will laugh...that's the real point. John actually has some experience in this department, so he should be able to pull off some very cool illusions, notice how he has the illusions and I have the tricks. We both will be working more stuff into the show for everyone to enjoy.
Posted by Rob Dimension at 5:30 AM