John Cannon reviews "Every Other day is Halloween"

"Every Other Day is Halloween" Review
by John Cannon

Imagine being a little kid and sneaking down the stairs so as not to wake your parents so as not to wake them. It is way past your bedtime and the only thing on your mind is to watch your favorite late night horror show. You flip on the TV and crank the volume to low so as not to wake your parents, because if they find you up and out of your room you are going to be grounded for life. The TV screen warms up and a light fills the room from the TV to reveal the opening credits of Count Gore De Vol’s Creature Feature.
Remember the days of your local horror host? Whatever happened to them? Well, Every Other Day is Halloween by CW Prather, takes a look at an icon of horror hostingly epic proportions as he reunites us with the host with the most, Count Gore De Vol. He was a horror host based out of the Washington DC area for quite a number of years even with a small hiatus in between. 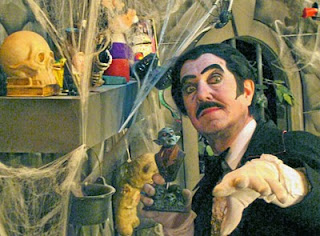 The documentary follows the man behind the Count, Mr. Dick Dyszel, who also portrayed Bozo the Clown and Captain 20 for the channel he worked on. It follows Mr. Dyszel through his past of all his characters till the ultimate and most memorable of that being the Count. He takes through the Counts creation as well as his ultimate demise due to the changing times of the culture. 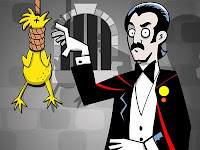 He was ahead of his time and focused his late night horror routine on his target audience at the time which happened to be women and stoned out pot heads. Always a good mix of a target audience if you ask me, lol.  He is a simple down to earth type of guy that would be able to just hang out at a BBQ with or to grab a cup of coffee at a diner with. He is an entertaining character and person and it is understandable as to why his character was so appealing. He believed in what he was doing and the most important thing was that he had fun doing. So many people hate their jobs and wish they were doing something else, but Mr. Dyszel had fun doing what he loved, and for that I admire him.
His show embodied the era in which he lived and took shots at some of the political actions going on as well as embracing the sexual revolution sweeping the culture. He would have penthouse pets on and would make sly sexual innuendos while maintaining his Count Gore De Vol character the whole time, which embraced the aspect of Dracula and the power of sexual persuasion he had over women.

I loved this documentary because it showed the behind the scenes aspect to horror hosting as well as showing us how fun it can be. He doesn’t tell people to not become horror hosts, but actually encourages people to do what they love best. In a world where everyone is trying to protect their spot and be the best, it is a breath of fresh air to hear a legend say to do what you want to do. And I used the word legend because that is exactly what he is. He has inspired horror hosts from all over the country and quite possibly the world. As my partner Rob and I take on this new venture of our lives in trying to bring people the best in horror and comedy we can only aspire to be as good as the great Count Gore De Vol was and is.
To read Rob Dimension's Review for Every Other Day is Halloween -
http://latenighthorrorhotel.blogspot.com/2010/05/every-other-day-is-halloween-dvd-review.html
Posted by Rob Dimension at 3:21 AM