Getting to know more about Rob Dimension 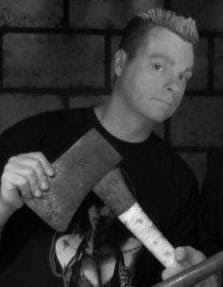 Back in April, when the show was just starting out, we sat John Cannon down and asked him some questions, read the interview here. This time around, we sat down with the other half of the duo, Rob Dimension. Never afraid to make himself the fool, find out where Rob has been, what he enjoys and how things are looking for Late Night at the Horror Hotel.
How long have you been involved with Wrestling? 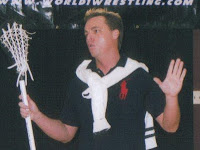 Pro Wrestling has been a big part of my life for over 10 years now. I have worn every type of hat within the squared circle, promoter, wrestler, manager, producer, writer...pretty much you name it. I was trained by Rapid Fire Maldonado, who was one of my favorite people to ever work with, Steve Corino, who many know is one of my best friends and has been everywhere and done everything and Afa the Wild Samoan, who really was more of a mentor in Life. These 3 individuals really impacted me and helped me become the best I can be. I will always be in debt to them all and am thankful for the numerous opportunities I have been given.
I have almost always portrayed the "Evil" Manager type because it just came natural. I have never been a Rah-Rah type guy, not because I am really a mean person, just can easily can get under people's skin. Wrestling has helped me become an improvisational performer foremost, just being in front of 5,000 fans, you better be able to roll with the punches and make stuff up as you go along, sometimes.
Are you a trained actor?
Seriously? Haha, no...not even close. Have you ever seen the show? I have been lucky enough to be in a few movies (The Pizza Man and Booley) but nothing really major. I would like to try my hand at acting more, but the hosting gig ties up a lot of my time. I am going to be taking some Improv classes soon, that looks like a blast to be involved with.
Ok, so let's talk about Late Night at the Horror Hotel. How did this show come about? 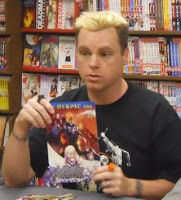 Our producer, Matt Burd the owner of Horror Shop Films, has known John and I for probably close to 8 years now. Matt was in the process of making a movie, The Pizza Man and had contacted John and I about a possible role. I had been kicking around a Horror Hosting idea while John was working on a Creature Cooking show. We all started talking, Matt decided to produce the show and the rest is history. Late Night is a 3 person show, really...in front of the camera and behind the scenes. I handle a lot of the PR and writing stuff, John is really good with a lot actually..between Ghost Hunting, effects and editing of our interviews he is tremendous, plus he is super funny. He plays the straight guy well, I think I am an easy set up guy, he's quick and can give a look or comeback that clicks. Matt lately has really become very involved with the production and now portraying Lord Von Heisenburger and comes up with some on the spot direction or ideas...it's all a good blend.
What's it like working with Cannon? 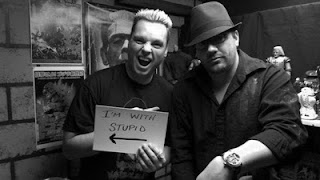 We have known each other, like I said..for years. We are always working on our timing, figuring each other out and bouncing ideas off each other. It's funny...in the beginning, we would review a movie and John wouldn't speak, well, it was because only I had seen the film. Later on we developed some writing skills to make sure, regardless we can both deliver on reviews or whatever we are doing. I think we are just hitting our stride.
Tell us about The Tour of Terror and what it involves 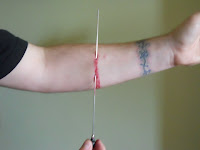 I thought up the Tour of Terror in the shower...tells you what I see...lol. I want to do things that other Horror Hosts aren't doing. No one travels amongst the Haunted attractions and sees the people, visits and exposes Halloween to people, so we wanted to do it. Some people can't get out, so let's bring the experience to them. Plus, those in the LIVE crowd will be able to see us do something other than just sit a table...we will host films and put on a live stage show and interview people for our show.
We are expecting some rough patches but I think it will be fun. We have been putting together a magic show for it...granted that neither of us really have Magic experience so we just grabbed a Magic Adviser, being Kurt Brash from Kurt's Magic World in Lansdale, PA. He is awesome and has great ideas. We are thinking more along the Geek Magic route (eating glass, needle through the arm...and I just learned to put string through my neck..Mom would be proud). Like I said, it's trail and error...we are just trying to be guests at as many places that will have us. I think we need to bring a lot to the table, hopefully we will do it.
People say you are Blunt and never short on words! What's your response to that?
Did John tell you to say this? I have been known to speak my mind, yes. Someone once said "if you don't have some haters, your doing it wrong"...I couldn't agree more. I will only speak for myself...lol..I don't want to pull John's name into this, but I treat this show like it's a business. We want to hear from the people who will support us, who will watch our show, buy our dvd and purchase our shirts. That is who we do this for.
If you have watched our show - Thank you, sincerely..it means a lot to John, Matt and myself..we work very hard and appreciate your input. YOU are why we do this...we hope you are entertained.
Posted by Rob Dimension at 4:08 PM