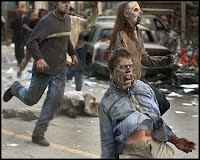 "Top 5 Zombie Movies of All Time"
by: Rob Dimension
The warm, hot air of Summer makes me think of one thing...ZOMBIES!!!!!...what if the Dead were walking the Earth? The foul, nasty smell of rotting flesh making your BBQ just a little better, that's what Summer is all about. Okay, so not really....but what better time to discuss my Top 5 Zombie films of all time?
Being a Zombie fiend, I love to talk about the walking dead, the timing seems to good to keep buried (literally). Now, by Zombie films, I mean the "Dead Shall Walk the Earth" Zombie, not the dreadful remake master Rob Zombie, sorry have to take every chance I can to slander Rob after his treatment of Michael Myers. 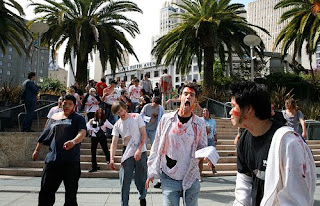 In the late sixties, a certain Zombie film changed the future of cinema and brought forth the "What If?" question that people will be asking for years to come. The Horror genre had exploded with the most terrifying threat of all time. What if the Zombie Apocalypse occurred? What if Zombies roamed the Earth? What repercussions would this have on Religion, would Earth truly become the new Hell? Questions became not could it happen but more to when will this happen. Are you prepared? What plan do you have in place when it happens? The Zombie apocalypse is always a great conversation, I am always fascinated by what people's opinions are and where they would "camp out". I will write a brief "survival course" at a later date, just for fun.
For now, hopefully, this list will catch you up to speed just in case, the event unfolds and you can thank me for saving your life.

Zombie History 101 - Zombies are reanimated corpses who feed on human flesh, rumored through Folklore and possibly voo doo origins. Zombies hunger for flesh and brains but that depends on the films you choose to watch or stories you choose to believe. Zombies have no fear and stop at nothing until the hunger subsides, which will never happen. Their hunger will last as long as they continue to inhabit the Earth. Strength and power also depend on the film series you choose, I prefer to believe the Zombies would be slow moving and groups of Zombies would pose a larger threat since the belief would be there is strength in numbers. I refuse to believe that Zombies can run, real Zombies walk at a slow pace, but that's just me. Romero is King...nuff said.


This list will be a countdown, as if we are counting down our last days on the Earth as we know it.

5. Return of the Living Dead (1985) - Sure, this film was really more of a comedy that truly horrifying look at Zombies, but this film is so good it just has to be mentioned. The story follows Freddy, a young punk rocker type who is starting his first days at Uneeda Medical Supply. Frank is given the job to teach young Freddy the ropes, while Freddy's friends are in the neighborhood waiting to pick him up for some serious partying later. Frank informs Freddy that the Night of the Living Dead series was real, they have a body downstairs in the basement in tank sealed by the Government. The mistakenly open the tank, releasing the dreaded gas called 245 Trioxin into the air. The Zombie outbreak begins and terror, mayhem and hilarity ensues.


Return of the Living Dead is a really fun movie with tons of action, gore and comedy that will please the biggest Zombie fan. Eighties Scream Queen Linnea Quigley has a great appearance as Trash and gets down and dirty (I think I may have lost my virginity to that scene), plus the soundtrack has been received well for years. Sure Zombies run in this one, but I am willing to let this one slide simply because this movie is so good. Check this one out, plus the sequels aren't bad either (Parts 2 and 3 at least...the others are awful)  and are worth dedicating a marathon too.

4. Zombie (1979) - Released in the United States as Zombie, Lucio Fulci's popular Cult Classic has also be released as Zombi 2, Island of the Living Dead and Zombie Flesh Eaters. At the time of it's release Zombie was labeled as excessively gory, that statement alone thrust the film into the wide open arms of Horror lovers world wide. Italian film maker Lucio Fulci became an Icon to Zombie fans and this might have been my first Video Nasty to watch.


The film's plot mostly takes place on an Island but is best well known for two specific scenes. In one scene a zombie fights a Tiger shark underwater, (nothing like giving us more fear about "Is it safe to go into the water?). Cheesy but original, this scene alone needs to be seen to believe. The second scene has been etched in the minds of everyone who was witnessed it, since it would be everyone's worst fear, A zombie impales a characters eye onto a splinter of wood, very slowly and what seems to be painfully. The special effects are decent enough to enjoy the film and I feel, without a doubt, this film belongs in ANY top five based on zombie and horror.

3. Day of the Dead (1985) - George A. Romero's third installment into his Dead series takes place well into the Zombie Apocalypse. I feel this film is more of a psychological horror film that just a gore fest since the remaining survivors are left to deal with mental breakdowns and the breakdown of their inner society.


Taking place in an underground military shelter, our survivors are all Government employees consisting of soldiers, internal help and doctors. Lead by Captain Rhodes who is a dictator using power to force others to maintain day to day operations is an over the top, selfish, demented leader. Temptations and pure insanity rule the day while Zombies rule the Earth. Trying to connect with the zombies (Bub) may be the last hope of survival.

Romero proves why he is the Zombie King providing the viewer with a real glimpse at social disorder and martial law. Plenty of gore to satisfy the biggest gore hound. I highly recommend this one.Tom Savini does a fantastic job supplying us with special effects that STILL are better than most in films today - Highly Recommended film.

2. Dawn of the Dead (1978) - In my opinion, this might be the film that really made people aware of zombies. The original George A. Romero classic, not to be confused with the Zack Synder remake, was originally given an X rating upon release and still today is regarded as one of, if the THE greatest Zombie films of all time. Released numerous times in various forms of box sets, special editions on VHS, DVD Blu-ray and Laserdisc, DOTD was highly profitable for Romero and all involved. Released also as Zombi internationally by Italian horror director Dario Argento and has an AMAZING soundtrack by Goblin.


Taking place in both Philadelphia and Pittsburgh, the Monroeville Mall is the main setting for this classic. Our survivors hold up in the greatest, plush mall I have ever seen. Battling zombies, a biker gang and themselves makes you think of your percentages of survival in this situation. Due to the setting of this film, Malls would be everyone's first place to head to making the malls probably the last place you would actually want to head to.

Special Effects master and wizard Tom Savini heads the task of giving the Zombies life. Great kill scenes, plenty of gore, a great script and good acting makes Dawn of the Dead an obvious choice to watch, this time of year. One a zombie scale based on an overall great time, I give this film a 10. 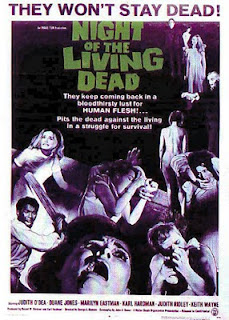 1. Night of the Living Dead (1968) - "They're coming to get you, Barbra!". Yes, the original zombie classic takes the number 1 spot on my countdown. Yet another George A Romero film leads the pack and rightfully so. The Independent black and white thriller is the story of a group of 5 people trapped in a rural Pennsylvania farm home. The sheer horror of the public, for the late sixties was the launching pad that Romero needed to become a success.


In 1999, the Library of Congress placed it on the National Film Registry as a film deemed "historically, culturally or aesthetically important", not to shabby for a zombie film.

Romero's vision really captivated the viewers, being remade, re released, mocked and re-imagined Night of the Living Dead also had it's share of problems. The film lapsed into the public domain because the original theatrical distributor and was released through several companies attempting to cash in on the film. George Romero felt "ripped off" but stayed true to his Zombie roots. Romero has since released numerous zombie films including "Survival of the Dead" based on an island off the coast of North America, where local residents simultaneously fight a zombie epidemic while hoping for a cure to return their undead relatives back to their human state. Looks like George still has some left in the tank.
Posted by Rob Dimension at 3:48 AM