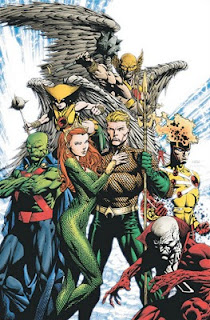 Dimension and James are back with Comic Reviews
By Rob Dimension
Hey gang, James from Cyborg One Comics in Doylestown, PA (www.cyborg1.com) was able to join Me as we looked at the hottest and best titles to currently in stores.
I wanted to spotlight some Indie titles in the beginning, notice that they are Horror, then get to the mainstream stuff. I really enjoyed Raven Gregory's The Waking, released through Zenescope. The series just wrapped and was a mystical, yet well grounded, fresh story. I would recommend checking that one out. There are only 4 issues and should be still easy to get your grubby little hands on. Others to look for: Crossed - Family Values, Hack/Slash: My 1st Maniac..I love Cassie Hack. We were both exhausted, but wanted to get the review done..please watch!!


Here is Part 1 of the reviews..we tried to cover a lot of titles:


Later this week we will be releasing a Beginner's guide to Comic Lingo...learn to speak amongst the nerds without feeling left out. John Cannon, edited these videos and was also very tired (being a Horror Host is more tiring then you can believe). Huge thanks goes out to him.
Posted by Rob Dimension at 4:02 AM