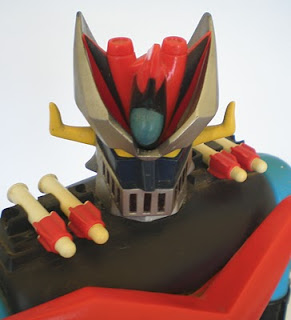 Back in the late 70's early 80's, 2 foot Japanese Robots were invading my room. Remember the Shogun Warriors toys? Well, I am expecting to see a comeback, if the news I have read is true.
Shogun Warriors were produced by Mattel in that era and were available in 3 sizes (Huge 24 inches of planet destroying plastic, plus 3 1/2in. and 5 in.die cast versions). Based off from popular, and not well known, Japanese Giant Robot characters like Mazinger, Getter Robo G, Raydeen, GaiKing and Diamos they also featured some kings of Kaiju like Godzilla and Rodan. 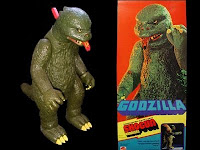 Launching missiles, battle axes or even their fists, Shogun Warriors were easily one of my favorite toys. Not so much the die cast (Chogokin and Popynica), although they were cool...the 2 footers (Jumbo Machinders) were where the action was at. Colorful, foreign and possibly the earliest inceptions of Transformers, they even launched a line of Comics, released by Marvel that saw cross overs with Tony Stark and the Fantastic Four. Pretty cool huh?

So, while doing my nerdly activities I happen to find some interesting news : According to Ain't it Cool News, a "Gaiking" film is being planned for 2012 release date by director Matthew Gratzner and special effects artist Jules Urbach, with a potential "Shogun Warriors" film planned as a sequel. While the report didn't indicate which giant robots from "Shogun Warriors" would appear in the films, it did offer some insight into how the robots will be brought to the big screen, and some impressive test footage created to promote the project.

So, here is some test footage to check out...while nothing Earth shattering, it does look pretty awesome. Also, Urbach says that "We'll have more 'Shogun Warriors' than ever appeared in the Marvel Comics." Plus, a huge plus at that - a new "Shogun Warriors" comic book series is coming from Dynamite Entertainment, with Alex Ross "mentoring on the project" and providing covers as well. Holy Go Nagai!!!

Posted by Rob Dimension at 2:50 AM