Long Pigs Film review - our biggest and best yet!! 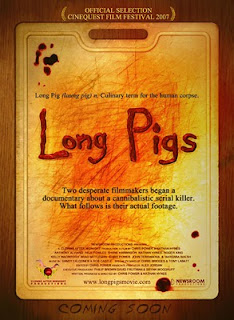 Long Pigs: Movie Review
This time around for the movie review, the Late Night crew (John Cannon and Rob Dimension) decided to pull double duty and review the Independent Underground Horror hit film, Long Pigs. After viewing the film, they were both blown away by how much fun and well put together the film really is. Gearing up for the official DVD release on June 7th, this is what they had to say about Long Pigs:

John - Long Pigs is a movie based around an independent film crew following around a modern day cannibal serial killer not unlike Ed Gein and Jeffery Dahmer. The serial killer is Anthony who is a basic simple man who puts the art of cannibalism as well as the act of killing into the same category of people eating meat such as cows and pigs. In one scene it shows him cutting apart a recently killed victim as he has the corpse hung by their feet as you would in a butcher shop. However as he goes about his deed he is talking with the film crew in a simple monotone sound with such a look on innocence on his face that you tend to forget that he has just killed this person and is preparing them to be eaten. He meticulously butchers the individual as a normal butcher would take pride in his cuts of beef/meat.
Rob -  The film crew played by writers-directors, Nathan Hynes and Chris Power, come across extremely eager, thinking this is the "big break" they have been waiting for. The term Long Pigs (laung pig) is the Culinary term for the human corpse, which is established early on. Our killer, Anthony McAlister (Anthony Alviano), like John said, comes across as "professional", almost teaching a "How to kill, cut and cook" your meal class. McAlister's nonchalant approach to his rituals make disliking him a task....I would hang with this guy, based on his public appeal, but behind closed doors you can see the unfolding of a madman.

John - The character Anthony himself is actually such a sympathetic character that you begin to feel for him and realize that this is a normal everyday occurrence that to him is like a person going to a grocery store to buy food in order to live. This simple average man works a regular job and even plays in beer league style hockey games. As you always hear in every serial killer report you see on the news “you never would expect him to be a gruesome monster because he always seemed so nice.
Rob -  Once the story begins to unfold, you can see the deeper issues with McAlister, problems with "Mommy" and how truly sick he really is. Having his Mom in a retirement home, she is unnerving and losing her mind. Seems Anthony has a few problems...
One sequence during the film, the crew meets up with the Father of a little girl who has gone missing. Digging deeper, you begin to realize that McAlister was responsible, admitting how the playground is a "super-market", he goes into detail about how the meat was tender. In the most ballsy move, the crew interviews the Father with McAllister holding the boom mic, I admit, this made me uncomfortable and want to see Anthony get caught. 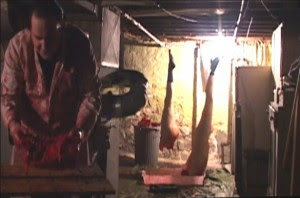 John - One point I enjoyed in the film is where, due to a flat tire, Anthony and the film crew go to a farm to secure a spare tire for them to get home. The farm turns out to be a pig farm and as you walk through their butchering area and see the pigs you can see more how Anthony views his ways as being that of a normal pig farmer.
Rob -  I enjoyed the way the film was pieced together, a lot of great editing. Well lit when needed and also some very clever use of music along with a fast forward sequence that shows how to dismantle a body. I also enjoyed the how to use the Kiln to get rid of the bones....fun stuff. Guess I now know what to buy for my basement smoker.
John - The movie is sprinkled with a police detective and behavioral psychologist explaining what goes through a serial killers head and just after they finish their speech it shows Anthony doing and being the exact opposite.

Rob -  I agree John, the detective scenes were insightful, since they help the pace of the film and grant you a view from both sides of the fence.
John - Now, half way through the film though you begin to look at him more as a monster and a disturbed individual that he really is. You can begin to see the symptoms, which were described by the experts, come out more and more in Anthony towards the end of the film until the final climax.
Rob -  What really gets me during the course of the film is the role the film crew plays. Not only witnessing murders, but partaking in them as well. The realism of their reactions was priceless, from the uneasiness of watching Anthony kill and cut up his victims to witnessing Anthony feeding his friends Ribs hot off the grill.
John - I don’t normally enjoy sitting down to watch movies and tend to sometime fast forward through parts that I feel are drawn out, but in this case I watched the film from start to finish without once thinking about hitting the fast forward button. This movie kept me wanting to see more and I was glad that I did not skip anything in this film.

Rob - I had my reserves going in, since this film had been compared to the August Underground series and even Leslie Vernon: Behind the Mask, but after watching and giving it a chance, I can honestly say, this film is not like them at all. While the films has similar themes, they are pulled off completely different. I ranted about this once I watched it, even congratulating the film makers, they have really done something fantastic. Long Pigs has won countless Independent film festival awards, if you are a fan of horror, this film is worth watching.
John - There were only a few things that I saw with this film that I would change. While the ending of the movie was good it did become a bit predictable towards the end. As well I thought there was a bit too much closure at the end as you see what happens to all the characters you met through the film ala Animal House.
I did enjoy this movie and they say never leave until the credits are done, well this is no exception. No, there isn’t a special surprise after the credits, but there is a conversation between Anthony and a radio show host, who interjects some points during the movie, that says to Anthony everything you would want to say to cannibalistic serial killer

Rob -  Yep John, I agree about the ending. The ending is predictable but I actually enjoyed the Radio interview during the credits, I thought it gives you both sides again...the Radio host expresses his disgust while Anthony claims he is reformed and looking to put out a cook book. Anthony continues to charm even to the bitter end.
I highly recommend this film. We are submitted numerous films to review, some are very good while some are just awful. Long Pigs is one of my favorite films of the year. It just stuck a chord with me, maybe I'm crazy but I just found the film to be fun, creepy and it came across different for me. Huge thanks goes out to Chris Power, Nathan Hynes and Anthony Alviano, as they have all given this film a heart and made us all a little hungry for some Long Pig Stew.

Posted by Rob Dimension at 4:37 AM