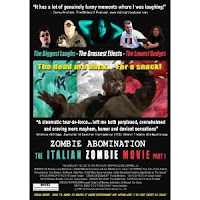 A few weeks ago, John and I were sent sent the Zombie Italian Movies (Zombie Atrocity and Zombie Abomination) by film makers Thomas Berdinski, included with a napkin, script, clips, screener and actual copy of the film. He went above an beyond the call of duty, but we are glad he did.
Paying homage to the great Italian Zombie film makers from the late 70's to early 80's, Berdinski really tries to give back to the likes of Lucio Fulci and Umberto Lenzi with a light hearted gorefest. With a modest budget, Berdinski uses lighting, classic Zombie make up and good ole' goofy humor to pull off a great addition to any Zombie lover's dvd collection.
I learned all kinds of things from these films...like Urine is sterile, (great to know early in the morning if I have a cut), usually if they are wearing a wrestling mask, they are probably a perv and I even learned some Woman's Lib. stuff (it mostly went in one ear and out the other). Plenty of gore, plenty of laughs and even some story in this 2 movie Zombified Epic. Berdinski should be given something like a Zombie Rotting Brain (made up award for really fun Zombie films...) for these two. Very fun films to sit and enjoy with some friends!

We give you a video review, check it out and after wards, go buy the film - Wanna see it? Wanna share the excitement? Wanna be drenched in blood and gore? Ok - then go visit the site you fiend! italianzombiemovie.
Posted by Rob Dimension at 3:36 AM