Every Other Day is Halloween DVD review 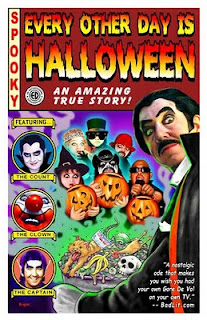 Every Other Day is Halloween DVD review
By: Rob Dimension
While at the National Haunters Convention, one of my main goals was to stop by and meet Count Gore De Vol. He was a class act and was willing to give pointers, take pictures and he even sold me his DVD!! His word of advice was "If you advertise something...never let down the viewers"...something I will listen to as the deadline for every show gets closer.
The Count is an inspiration for any of the Horror Hosts out there on public access, late night local network or even just on the internet. Beloved by many in the Washington DC area, not just as The Count but also as Captain 20 and Bozo the Clown. Dick Dyszel has managed to reach people's homes for almost as long as I have been alive.
Every Other Day is Halloween spans Dick Dyszel's career and includes the good times with the bad. Filled with tons of clips from all of his shows, it's very easy to see that he loves what he does. I think what I enjoyed was that he wasn't afraid to expose how hard it really is to make it in TV. The Internet has given everyone a voice, but I'm referring to working on a local station, dealing with the station being sold and the new bosses simply not "getting" your show. 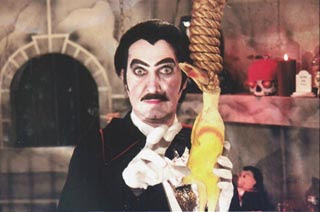 The DVD is packed with plenty of Interviews, not just by Dyszel, but guys like Karlos Borloff, who is another DC/Virgina Horror Host. Borloff, who really shows how much Dyszel means to him, following his career for many, many years, even has him on The Monster Madhouse, Borloff's successful Horror show. 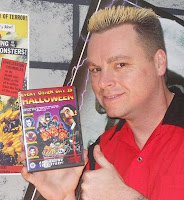 Plus reviews from Dr. Sarcofiguy, Arch Campbell, Steve Niles (creator of 30 Days of Nights plus countless other comics) and many, many more. The key to this, for me, was the emotion and following that the Count Gore De Vol character gained by the fans. People grew up watching him, not just once a day, sometimes 2-3 times a day as different characters. The films has heart and shows that some good guys, finish First.
I HIGHLY recommend this film for anyone who struggles to wonder..."why am doing this". If you are an actor, Dyszel shows perseverance, battling numerous fights to be your Host of "Creature Feature", throughout his career.
Want  to see Count Gore De Vol still? Visit http://countgore.com/gore/index.html  and watch as The Count entertains to and makes watching some of yesteryear's worst movies, FUN.