The shows from Yesterday - Remembering Johnny Sokko and His Flying Robot 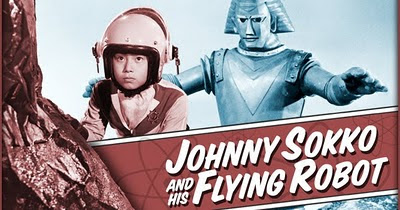 Ah yes, remember the days of getting off your school bus and running home to watch those certain, "must see, can't miss" shows? I don't think that the kids today have the same feeling, shows aren't the same.

Johnny Sokko and His Flying Robot was a show that was similar in taste to Ultraman, Space Giants and Spectreman to name a few, and for many, is a long lost childhood memory.
The Earth is under attack from the dreaded Gargoyle Gang and it's up to the uber secret organazation of Unicorn to help keep the peace. Can Johnny Sokko and his Flying Robot save the day?
Late Night at the Horror Hotel, next week will be filming a special "Kaiju Cinema" 1/2 hour show that will feature some of these shows. Up first will be Johnny Sokko and His Flying Robot. The show will be an internet only show and will run an approximate 30 minutes. Keep in mind, quality of these shows is below standard level but we are going to do our best to give you guys a trip down memory lane with (Hopefully) plenty of laughs along the way.

Posted by Rob Dimension at 3:36 AM