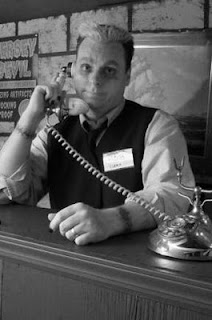 Haunters Convention will never be the same

Late Night at the Horror Hotel co host, Rob Dimension will be wandering around, probably aimlessly, at this years National Haunters Convention at the Valley Forge Convention Center in King of Prussia, PA.

The convention runs from April 29th - May 2nd and is a convention aimed at Haunters from around the country, providing key tips to make their haunted attraction the very best it can be. Vendors from all over will be on hand, exhibiting the finest in special effects and marketing tools to make for a profitable haunting season.

Dimension will be handing out flyers and killing people with his sense of humor (don't feel obligated to laugh...no one does) discussing the Late Night at the Horror Hotel's - Tour of Terror promotion.

John Cannon and Rob Dimension are both die hard Horror fans and Horror Attraction enthusiasts. Seek out Rob or email the guys at LateNightHorrorHotel@hotmail.com and find out how you can be part of the TOUR OF TERROR!!!!!!