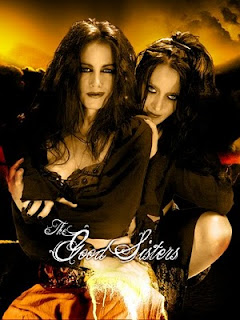 A few weeks ago, the guys at Late Night at the Horror Hotel had a chance to sit and watch "The Good Sisters" from Forbidden Pictures. Here is the video review and below is the written review from Rob Dimension. Enjoy and make sure you visit www.ForbiddenPictures.net for more info. This DVD hits shelves on April 27 - so don't wait!!

A movie that involves Witchcraft and hot chicks usually is a must watch for me. Throw in April Monique Burril and Debbie Rochon and it's now mandatory to see. I was sent the new JimmyO Burril film, The Good Sisters to review, here are my thoughts -

The Good Sisters Synopsis - Breanne Good (Debbie Rochon, TROMEO AND JULIET) and Kindra Good (April Monique Burril, CHAINSAW SALLY) are sisters with a secret life -- practioners of witchcraft, glamours, and black magick. Fiercely protective of their privacy, craft, and ancient bloodline, they become suspicious of their new neighbor Daniel (David Calhoun, CHAINSAW SALLY) who also leads a life shrouded in mystery. Unsure if he is unnaturally obsessed with them - or if they are only being paranoid -- the Good Sisters will have to draw all their power about them as it becomes clear their ages-old battle of good versus evil, light versus dark, freedom versus oppression may be about to begin again. Which leaves the question ... who is being Good, and who is not?
In the beginning of viewing, I was wondering what was going on since you have two sisters who are Witches, the most nosiest of neighbors and a bizarre downstairs neighbor that wears rubber gloves, doesn't have any furniture and is obsessed with the "sisters upstairs". Quickly, the story begins to unfold, but you are unsure if what you are watching is reality or paranoia within the girls minds. 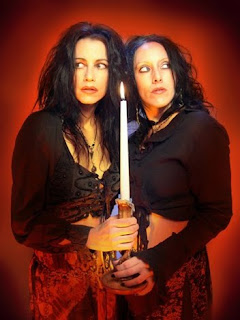 I will not spoil the movie for anyone, but I will say I enjoyed the film. Rochon's character, Breanne Good, really controls the first 2 acts and seems like the more sane of the two, the dominant. She is very comfortable within the role and plays the part of a witch, fantastic.
Burril, playing Kindra Good, really comes into her own in the last act of the film. The normal, psycho crazy character that we are used to seeing her play (ok, did I get over the point that see comes off nutty?...lol), just makes the ending that much stronger.
I would love to see these two back in a film together but on opposite sides, I feel that Rochon has helped Burril grow as an actress and they almost feed off of each other. They have great chemistry on screen.
JimmyO has stepped up in this film also. He has grown as a director and writer, at least since Chainsaw Sally (I liked the film but can tell that both JimmyO and April are both seasoned now). The use of shadows, color, subtle music and atmosphere all bring this film together. Trick camera work also helps add to the paranormal aspect to the movie. I look forward to more from JimmyO in the future.
In closing, I would recommend this film. The Good Sisters is a clean, glossy finished film that is a step higher than most Independent films out right now. They prove that little gore, good casting and a decent story can make a fun film. Looking forward to the next project!
For more info about The Good Sisters and other dvds and merchandise, check out www.Forbiddenpictures.net
Posted by Rob Dimension at 4:24 AM