Late Night at the Horror Hotel - Now reviewing movies too?? 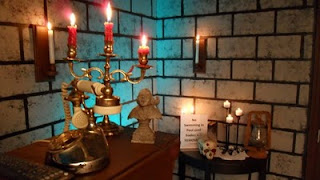 Yes, Chef John and Rob the Clerk...and Pugly the Bellhop will sit in on a few too, will now begin reviewing movies directly from the set of Late Night at the Horror Hotel.

Late Night at the Horror Hotel, a late night horror host show that features Chef John, Rob the Clerk and Pugly the Bellhop dealing with life on the Graveyard shift in Purgatory. The show is currently in post production and will be available via the internet, local public access and on DVD. This is a great opportunity to get to know the guys better and also learn about some films you may have not heard about before.


As some of you might know, Rob the Clerk (Rob Dimension) has written for several horror sites and has recently begun reviewing films. Here is your chance to be seen by a larger audience. John Cannon and Rob Dimension are both avid horror fans and have sat through some of the best and worst in horror, let others hear about your movie.


Interested? If you are a film maker and want your favorite graveyard shift employee’s to watch and review your film, here are the details:


·         - All films submitted to Late Night at the Horror Hotel are agreeing to have their movie details and cover art shown on the review. Trailers may also be attached.


·         - All movies submitted MUST come with Cover art; the guys want to have something to show people. If you are serious about your project then a good presentation is valuable. At least something that the guys can use as a visual, let us know if other arrangements can be made.


·        -  Please understand, the production value will not be as high at the TV show, the guys are doing this as a way to help Independent film makers get the products seen. We are hoping to have more people become fans of your film.


·         - All reviews will NOT be positive. The guys will not spoil a lot of details; just mention the basics, the good and the bad. If your film does not appeal to the guys, they will mention whom it might appeal too. Our goal is not to offend or push potential viewers away from your hard work.


·         - Not all movies will be chosen. We have already gotten several films to review and not all can be chosen. We are aiming at releasing 6-8 video reviews per month. Rob Dimension may opt to write a written review about your film on the BlogSpot. Please include an email address and contact info, so we may contact for any reason.


Our main purpose for this is to help the Independent Film Makers out there, desperately trying to have people notice their films. We firmly believe that the life line of Horror is on the Independent level. For more information, contact us via Facebook or email at LateNightHorrorHotel@hotmail.com


Thanks – Rob the Clerk, Chef John and Pugly the Bellhop and rest of the graveyard shift at the Late Nigth at the Horror Hotel
Posted by Rob Dimension at 3:59 AM