Kaiju Review - War of the Gargantuas 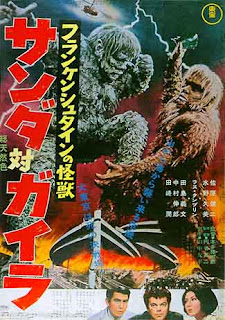 War of the Gargantuas
By : Rob Dimension
Released in Japan by Toho in 1966 under the title - Frankenstein's Monsters: Sanda versus Gaira, War of the Gargantuas was almost a sequel to Frankenstein vs. Baragon (Frankenstein Conquers the World).
The Gargantuas have been created from the cells of the Frankenstein monster and are described as Brothers (even referred to as Clones). Gaira, the Green Gargantua lives in the ocean, having a taste for human flesh and some serious anger issues is the first to arrive on the scene. Destroying ships, eating the crew and crashing parties (almost eating the singer...TOHO - why the musical number?). While Sanda, the Brown Gargantua is the opposite, living in the Japan Alps and being more kind and docile (I mean..as nice as a Gargantua can be).
For the earlier parts of the film you watch as the military starts to piece together the Gargantuas story. From flashbacks to when a young Frankenstein was being rasised to the scientists figuring out that if the military continues to harm the Gargantuas, cells from their skin will create more Gargantuas and will soon take over the Earth. 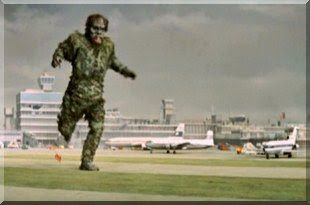 I won't spoil the finish for the film, but I will touch on a few things : The interaction between Gaira and Sanda is fun. If you are fan of Epic battles between to huge, city crushing monsters...then this film is for you. Early on you see the brotherly instinct take over as Sanda wants to help the injured Gaira, but that soon leads to Sanda realizing that Gaira has turned to the dark side. The battle sequences are fun, well done and would make any Kaiju fan giggle with excitement.
My final word on this film is simple. It has it's place within the Godzilla universe, if you haven't seen it...do yourself a favor and check it out. I think the most current release has it paired with Rodan in a Dvd 2 pack, you certainly can't go wrong with that. The musical number just made me cringe and smile at the same time and all I could hope was that Gaira would go through and eat the singer and "get stuck in his throat".
Posted by Rob Dimension at 4:27 AM