Have a Podcast, Radio show or Blog? We have an offer for you!

Late Night at the Horror Hotel is seeking interviews via, podcast, radio show or print. We are hoping for your help and in return, we are willing to help you. Late Night at the Horror Hotel will provide you with a 10-15 second promotional spot advertising your podcast, blog or show. We are Horror fans and besides our show, we love to talk about all aspects of horror. 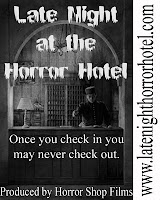 Synopsis - Late Night at the Horror Hotel is a late night horror host program, soon to be debuting on the internet and hopefully, on television in your town. The program features Rob the Clerk (portrayed by Rob Dimension), Chef John (portrayed by John Cannon) and Pugly the Bellhop. They work the graveyard shift in Purgatory and pass time by watching B Horror films, creating trouble (it’s usually Rob the Clerk who has all types of out of whacky schemes that always fail) and Creature Cooking recipes (courtesy of Chef John) themed for the film the guys are watching.

Also – Late Night at the Horror Hotel will be filming video reviews of current and past Horror films. The video promos will be shot directly from the set. We are trying to fill a void and provide a well rounded service to the Horror Community. We are here to help spread the word. If you know of any independent film makers interested in sending us their film, please let them or us know.


If you’re interested, here is a sneak peek of our show http://vimeo.com/10819356 and for more information about the show, please visit www.LateNightHorrorHotel.com . The show is produced by Horror Shop Films.

Rob Dimension – Rob has extensive knowledge of programming and promotional video producing. Having been involved in Professional Wrestling for nearly 10 years, including writing and producing several shows. Both a behind the scenes and on air talent, Rob always has something to say. Dimension also currently holds the Horror film blog site - http://robdimension.blogspot.com/ and will always be willing to discuss his thoughts on yesterdays and today’s horror classics and well, not so classics.


John Cannon – John also has plenty of film experience, a vast knowledge of bad horror films has prepped him for this very show. Cannon has also been a staple in North Eastern region of Professional Wrestling, in fact having traveled to other countries to enhance his abilities. Cannon has taken his passion for cooking and created “Creature Cooking”, updated with plenty of delicious recipes for fans of Horror, Science Fiction and more to enjoy. Look for his cookbook coming soon.


Horror Shop Films – The producer of Late Night at the Horror Hotel is operated by Matt Burd. Currently working on his first Horror short entitled: The Pizza Man”, Burd also has an extensive history in producing television. His past, working within the Horror Haunting community is an asset in both staging haunts and designing them.


Thank you again for your time and we looking forward to hearing from you. Email us directly at LateNightHorrorHotel@hotmail.com