The 2nd Batch of Promtional Videos 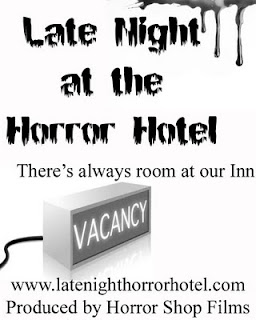 This group of promo videos are for the groups that have reached out to us or have been leaders in the genre, especially at Horror Conventions. Horror Conventions are a great way for fans of Horror to meet each, compare notes and have some Ghoulish times.
Chainsaw Sally - Has Created her own Niche' on her own, her own way. Hats off to April, JimmyO and the rest of the crew at Forbidden Pictures. The guys recommend what to watch when "your home all alone!"

Up next are a group that have helped promote us all within the Independent levels of Horror. Horror Society - these guys are always there to lend a hand (or heart...in a pinch) and have gone above and beyond for us many times.


House of Mysterious Secrets is every Horror Geeks heaven - selling T shirts, Stickers, Posters, Soundtracks, Action Figures and much more. We are gonna be trying to work closer with these guys and they are local to us (Philly)

Fright-Rags - one of the best in Horror T Shirts. If you have ever been to a Horror Convention, chances are you have seen Ben and the crew. They have even started with Special Edition T Shirts, currently it's a Plan 9 T Shirt...go check them out. Our co-host, John Cannon says "I own almost all of the shirts they ever released!"

The Guys express how cool Fright-Rags really are!!

Lastly - These guys are one of our Co-Hosts, Rob Dimension's, favorites. The artists from The Living Corpse Comic, Buz and Ken. If you haven't ever picked up a copy of The Living Corpse, do yourself a favor and check them out. Classic, horror style art work..plenty of gore and something that would make any Horror fan proud.